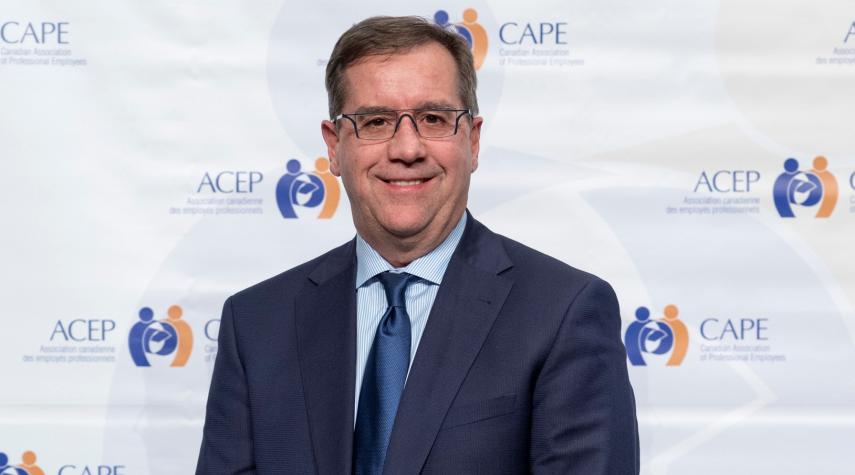 The Executive Director, serving as the Chief Operating Officer (COO), Claude Vézina is the most senior non-political staff position within the Association.

END_OF_DOCUMENT_TOKEN_TO_BE_REPLACED

Our management team runs CAPE operations and is responsible for implementing the vision and strategy outlined by the National Executive Committee. Members of the management team are dedicated to ensuring our members get the best services from their association.

As Director of Policy, Claude provides leadership in the development and implementation of strategic policy frameworks and responses, while providing thought leadership on issues affecting the membership. He also advises the Executive Director, the National President and the National Executive Committee on governance-related matters. In his capacity as Chief Negotiator, Claude leads as negotiation strategist and mentor for CAPE bargaining teams. He is also responsible for coordinating bargaining activities with other bargaining agents and the employer. His career spans four decades and includes various roles in the education and public sectors. Claude held various professorial roles for York University and then for the University of Ottawa. He has been an active and dedicated union organizer and officer, as service officer for the environment component of the Public Service Alliance of Canada (PSAC), as labour relations and research officer for the Economists’, Sociologists’ and Statisticians’ Association (ESSA), which became the Social Science Employees Association (SSEA), as director for the SSEA, which became CAPE, as executive director for CAPE, as negotiator then political assistant to the National President of PSAC, as political advisor to the President of the Canada Employment and Immigration Union, a component of PSAC. Claude has demonstrated a lifetime commitment to the labour movement and the pursuit of social justice. Claude graduated from the University of Ottawa with a bachelor’s degree in social sciences and an MA in sociology, and from York University with a PhD in social and political thought.

Audrey has joined the CAPE team to take over the role of Director, Policy and Negotiations to replace Claude Danik as he phases into retirement. Audrey is a lawyer with over 25 years of experience in labour relations. She is a seasoned negotiator in the public and quasi-public sectors, and has held a variety of senior-level positions leading teams in labour relations and human resources over the course of her career. She holds a law degree from Dalhousie University as well as an education degree from the Université de Moncton in New Brunswick. Audrey is a proud Acadian, loves to travel and is a year-round mountain biking enthusiast.

Jennifer works closely with the President of CAPE to provide advice and guidance on labour relations and policy issues affecting the membership, and support on the strategic direction and planning of the Association. She advises the President on the requirements and interpretation of CAPE’s constitution and by-laws, on collective bargaining and negotiation strategies, and on the laws governing the activities of the Association. Jennifer also coordinates closely with the National Executive Committee, as well as the CAPE management team and leadership community across the country. In addition, she collaborates with the federal public service union community and the Canadian federal government on policy issues and special projects to protect, promote and advance the interests of CAPE members. Jennifer graduated from Concordia University with a degree in economics and is a member of the Law Society of Ontario. Prior to joining CAPE, Jennifer worked for several federal government departments including the Department of Justice and Global Affairs Canada. She also previously worked as an employment relations officer with the Professional Institute of the Public Service of Canada (PIPSC) in various regional offices across the country.

As Director of Finance, Omid is responsible for overseeing all financial activities of the Association. He develops financial strategies and oversees the day-to-day operations of the Association, including strengthening the information system. Omid is also responsible for membership management to ensure all members are accounted for. As Director of Finance, Omid provides his guidance and expertise to the National Executive Committee, the Finance Committee and the Audit Committee. Omid is dedicated to safeguarding the Association's assets through rigorous internal controls, monitoring expenditures and finding efficiencies for day-to-day operations. He is dedicated to making sure that every dollar spent by the Association is well spent and is always in the best interest of its membership. Omid has 15 years of experience in the non-profit sector. He started his career with Hydro Ottawa, becoming the youngest budget officer in the organization's history. His career led him to working for the federal Public Service in various departments, including Canadian Heritage, the RCMP and the Department of National Defence, where he contributed to major initiatives such as the Vancouver Olympics, the North American Leaders Summit and the G7 meeting. Omid's passion, when he is not riding his mountain bike in the woods, is using his accounting expertise to promote ethical and sustainable business development.

As Director of Communications and Public Affairs, Katia leads the team responsible for communications, government relations and public affairs. She is responsible for devising and implementing CAPE’s communications and member engagement strategies. She also oversees the development and implementation of government relations strategies and of public advocacy campaigns to further the interests of CAPE members. Particularly, Katia leads efforts to establish and maintain relationships with federal decision-makers to pursue the adoption of measures and policies that can benefit the membership, while raising the awareness of the Canadian public and preserving its support. She is also responsible for assessing and advising the national leadership on trends and emerging issues or crises in the political and public spaces that could affect members or the Association as a whole. Over the last 20 years, Katia has worked for national and international organizations, including the African Development Bank, Nutrition International and the World Bank, in matters related to branding, knowledge management, partnerships, public relations, marketing, and crisis and reputation management. She has led global campaigns to promote human rights, social justice and the environment. Katia holds a law degree from Université de Montréal and a master’s in communications from Université du Québec à Montréal.