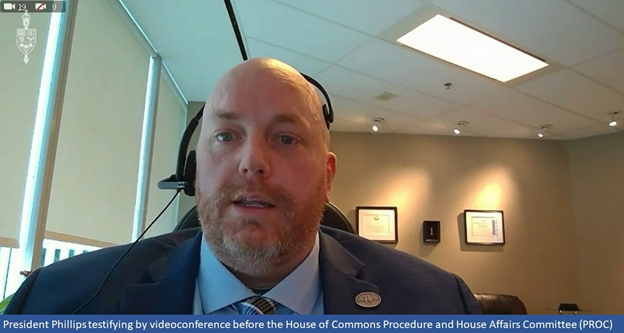 On Monday May 4th, Greg Phillips, in his capacity as national president of the Canadian Association of Professional Employees (CAPE), testified before the House of Commons Procedure and House Affairs Committee (PROC) as part of its “Parliamentary Duties and the COVID-19 Pandemic” study. Speaking on behalf of federal interpreters represented by CAPE, Mr. Phillips sounded the alarm on the strain and increasing number of injuries government interpreters are sustaining during virtual parliamentary meetings held since the beginning of the lockdown.

In his remarks, Mr. Phillips highlighted several concerns that have been brought to CAPE’s attention including “technical glitches or poor compliance with interpretation standards and conditions.” Injuries reported by interpreters include acoustic shock, headaches, nausea and tinnitus. Over time, these can impair their hearing and concentration which are critical to do their job.

Nicole Gagnon, advocacy lead at the International Association of Conference Interpreters (AIIC) and her colleague Jim Thompson, communications counsel, both confirmed the information shared by CAPE and provided more details on the interpreters’ experience and suffering.

•    View the recording for the PROC hearing

During his presentation, Mr. Phillips also argued that the situation interpreters are facing is affecting their ability to effectively champion Canada’s two official languages given their important role in promoting our country’s linguistic duality. When glitches occur or whenever interpreters are interrupted or ill-equipped to follow a speaker, they are unable to offer the high-quality interpretation in both languages as is expected. This is doing a disservice to both parliamentarians and Canadians.

Since the May 4th testimonial, some correctives measures have already been implemented. For one, during the virtual question period held on Tuesday, May 12, both the Prime Minister and the Deputy Prime Minister were reported wearing a headset with a boom mike, for the very first time.

On this day as well, the Treasury Board Secretariat confirmed to CAPE the full involvement and support of the Assistant Deputy Minister, Human Resources at Public Services and Procurement Canada (PSPC) in tackling this issue. The Assistant Deputy Minister is currently looking at creating a hearing protection program, and to that end, has retained a Doctor from National Research Council Canada (NRC) to review the situation and report back with findings.

While those are big wins for federal government interpreters, CAPE will continue its discussions with the Translation Bureau and will maintain pressure on the government to adopt an action plan to ensure the safety of its members in the long term.