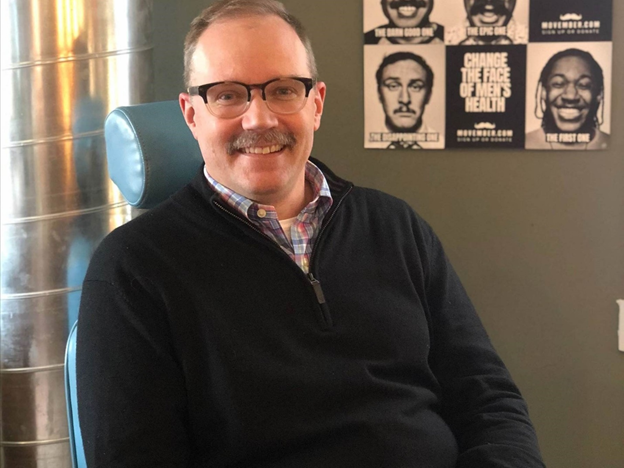 Movember is better known as the month-long campaign ran each year around the world throughout all of November to raise awareness of men’s health, focusing on issues such as prostate cancer, testicular cancer, mental health and suicide prevention.  Over time, Movember has also become a global movement which goal is to encourage men to pay greater attention their health and to get help when needed, this with hope to reduce the number of untimely deaths in men and to improve their overall well-being.

The Canadian Association of Professional Employees (CAPE) interviewed Movember’s Canada Country Director, Todd Minerson, who kindly accepted our invitation to tell us more about the movement, its different campaigns, and to educate us on some of the unique health challenges faced by men.

CAPE: Welcome Todd and thank you for taking the time to talk with us. Can you tell us more about Movember and what you focus on?

Todd: Movember started in Australia in 2003, when on a lark, a group of friends decided to grow moustaches for a month in support of prostate cancer research.  Their first go was so successful that the next year they launched Movember.  We are now running campaigns in over 20 countries around the world. Our roots are in prostate cancer research and support, but as we evolved, our mandate did as well.  We are now committed to changing the face of men’s health and have three focus areas.  Prostate cancer, testicular cancer, and men’s mental health and suicide prevention.

Earlier you mentioned prostate cancer as one of you focus areas, can you tell us more?

1 in 9 Canadian men will be diagnosed with prostate cancer. Over 4000 Canadian men per year will die from the disease.  That’s the bad news.  The good news is that when we catch prostate cancer early, there is a 98% chance for survival.  Once the cancer has spread beyond the prostate that drops to a 26% chance for survival.  We have made tremendous progress, and the research we are funding focuses on better diagnostic tools, reducing side-effects of treatment, more personalized treatment approaches.  Our True North Prostate Cancer Project is a global initiative to help men with life beyond prostate cancer.  With a 98% survival rate after early detection, we are hoping for a lot more survivors to support!

What about testicular cancer?

When I started at Movember, I was under the assumption that testicular cancer was an “old man’s” disease.  How wrong was I?  Testicular cancer is the most prevalent cancer among men under the age of 39.  Like prostate cancer, we are seeing incredible survival rates with early detection, but the key is early detection.  Where awareness and self-examination behaviours have made great progress in things like breast cancer, we have a way to go for men and testicular cancer.  In the most simple fashion, if something doesn’t feel right- get checked by a doctor!

Can you tell us more about Movember’s “Man of more Words” campaign and what message you want to convey and what you want to achieve?

This fall, for World Suicide Prevention Day, we launched our “Man of More Words” campaign. We are deeply concerned that 3 out of every 4 suicides on the planet are completed by men.  What role does gender play in this?  We think there are connections to some of the rigid gender roles and stereotypes facing men today.  Tough it out.  It will be fine.  An inability or unwillingness to ask for help.

Poor coping mechanisms for dealing with trauma and challenges in life.  As stigma around mental health and wellness.  One of the first steps we can challenge men with is breaking down the barriers about talking about mental health.  The “Man of More Words” is a campaign I think most men can relate to.   Speaking up and speaking out is the first step helping men get help.

In fact, the Centre for Addiction and Mental Health (CAMH) reported that more than 75% of deaths by suicide in Canada are men. What do you think explains this?

The research is still in progress to identify to full reasons behind this.  However, what we are also learning is there are other categories of men where these rates are even higher.  For example, veterans and first responders have suicide rates much higher than the Canadian population and are disproportionately men.  In 2020 Movember will be putting out a call for proposals to support initiatives working on this challenge.

Similarly, we know suicide rates in Indigenous populations are disproportionately high.  Our global Indigenous Lead is located here in Canada, where we are supporting land-based and culturally focussed programs developed in concert with Indigenous communities.  Recently as well, we worked with Ty Smith, a survivor of the Humboldt Broncos accident about opening up and asking for help. These are a few ways we are trying to dig deeper into this problem.

The opioid crisis is hugely complex, and likely not solvable by any single level of government.  What we hope is that policy follows evidence-based approaches, including harm reduction, and addressing the root causes of trauma and adverse childhood experiences that may lead to addictions.

Acknowledgement: Big thanks to EC member Michael Pedersen for his extensive data research and support. Michael was also one of the early champions of this awareness campaign.

Other statistics to watch for