CAPE meets with the leader of the Green Party of Canada 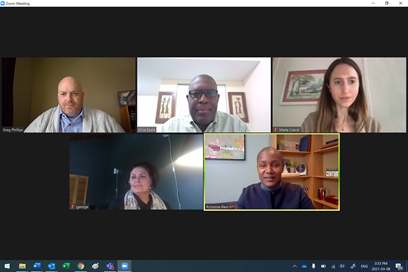 March 8, 2021 - OTTAWA – On Monday, March 8, a delegation from the Canadian Association of Professional Employees (CAPE) led by its President, Greg Phillips, met with Annamie Paul in her capacity as leader of the Green Party of Canada. The meeting was organized as part of CAPE’s effort to reach out to party leaders across party lines to discuss issues affecting the CAPE membership and to seek support.

During the meeting, which took place virtually, Phillips brought to Paul’s attention the ongoing challenges federal interpreters have been facing since the beginning of virtual parliamentary sittings and committee hearings. Recognizing the seriousness of the problem, she committed to raising the issue during the Green Party’s next caucus meeting.

Canada’s post-pandemic economic recovery was touched upon, and Phillips shared his perspective on the role the public service community can play in devising a sound plan, emphasizing the value that federal economists, analysts, and statisticians can bring to this endeavour. Statistic Canada’s economic impact module was mentioned as a critical tool to leverage to deliver impact analyses. There was also agreement on both side regarding the need for, and value of, disaggregated data to inform future decisions as we emerge from the pandemic.

A pro-union politician, Paul expressed interest in reconnecting with CAPE in the future to see how policies the Green Party is working on may affect CAPE members and the public service community as a whole and adjust accordingly.

From the Green Party of Canada