Union Solidarity on a large scale

For the first time ever, the principal bargaining agents representing Canada’s federal public servants have decided to join forces to combat the Conservative government’s efforts to turn the clock back on federal workers’ rights.   The federal government is currently demanding concessions at the bargaining table that flow directly from Bill C-4, which received royal assent in December 2013. This legislation attacks government employees’ rights to collective bargaining and union representation; it also eliminates key health and safety protections. One thing was made quite clear by Treasury Board President Tony Clement: the object of Bill C-4 is to change labour relations in the public service so that the government can impose its will on workers.

Given the magnitude of this assault, which is without precedent in the modern history of labour relations in Canada, the bargaining agents listed below have signed a formal agreement to protect the rights of their members. This agreement represents a commitment on their part to devote whatever financial and human resources are necessary and to turn to the courts in cases where such action is appropriate. The constitutional validity of certain parts of Bill C-4 is already being challenged in the Ontario Superior Court.

For the moment, the battle is primarily being waged at the bargaining table. The bargaining agents have made a joint decision to categorically reject all attempts by the employer to impose concessions on collective agreements, including any that might affect sick leave.

As far as CAPE President Claude Poirier is concerned, unwavering solidarity during these contract negotiations will play a key role in the fight against the concessions which the government is trying to impose on union members. “We are facing off against an employer capable of bringing vast resources to bear as it seeks to impose its will in the current round of bargaining,” Mr. Poirier stated. “That is why,” he added, “we as bargaining agents must combine our resources to offset the government’s strength and thus protect the rights of federal workers.”

Major awareness campaigns directed at union members and the general public will soon be launched to explain the actual scope of the reform which the Conservative government is trying to impose on labour relations in Canada. Several of the basic rights enjoyed by federal workers, such as freedom of expression and freedom of association, will be targeted.

The Professional Institute of the Public Service of Canada (PIPSC) believes the government’s goal is not just to impose budget cuts, but also to take away from workers the autonomy and rights that public sector unions have been defending and upholding for more than 50 years.

According to PIPSC President Debi Daviau, “this inter-union agreement is extremely valuable if not essential if we are to continue working for the advancement of public servants’ rights.”

Private sector unions will also be approached. We will be asking them to express to their members and the general public their opposition to the changes being imposed by the Conservative government.

The following bargaining agents have signed the solidarity pact: 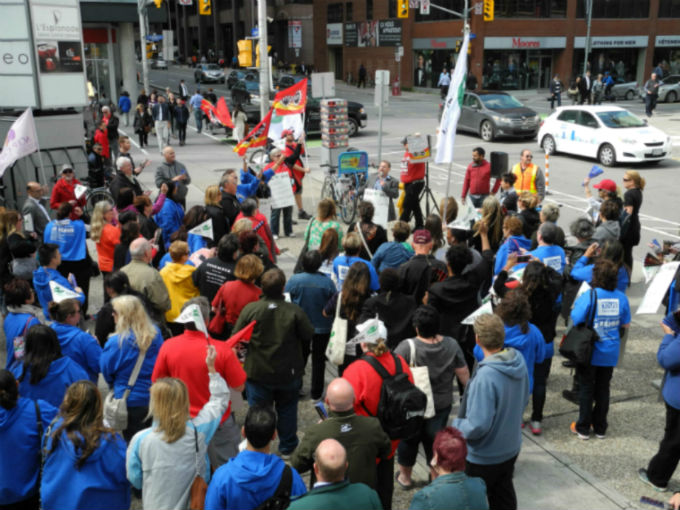 September 15 demonstration in Ottawa
Union members demonstrated in front of Treasury Board on September 15 against the government’s proposed changes to sick leave benefits.