Highlights of AGM 2019 “Strength in Diversity”

Please note that due to circumstances beyond our control, CAPE was unable to publish the AGM Highlights in January 2020 as originally planned. We apologize for the delay and thank you for your kind understanding. 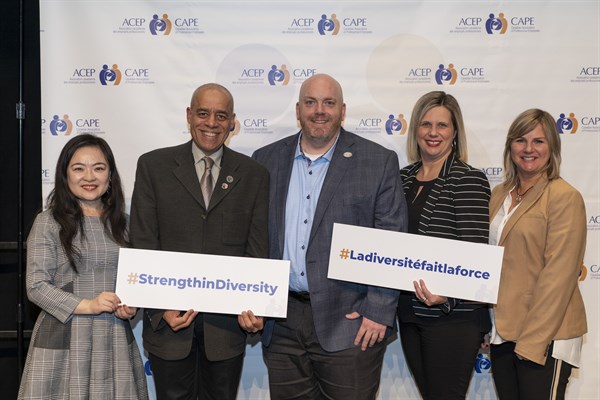 On Wednesday, November 13, CAPE held its 2019 Annual General Meeting (AGM) under the theme "Strength in Diversity". This year, our guest of honour was Larry Rousseau, executive vice-president of the Canadian Labour Congress (CLC). He spoke on diversity and inclusion in the workplace.

Members also heard from our other guest speakers, Roxanne Lépine and Catherine Gilbert, codirectors at the Joint Learning Program (JLP), and Jasmin Qi, team leader at the Ottawa Community Immigrant Services Organization (OCISO). They gave us a brief summary of what their organizations do to promote diversity in Canadian society and in the workplace. They also touched upon how public service employees can benefit from their services.

Greg Phillips, president of CAPE, presented an overview of last year’s accomplishments and shared several updates. Greg highlighted the four new signed collective agreements and the Phoenix MOU. He also offered a summary of developments in various areas, including advocacy, government relations, labour relations and member engagement. In addition, Greg reported various improvements at the operational level. A more detailed review will be provided in the Annual Report 2019 expected to be published and shared with members soon.

The second part of the AGM was dedicated to the presentation of CAPE’s audited financial statements and annual budget. It also offered an opportunity for two EC members to introduce a new resolution.