Phoenix on the Hill 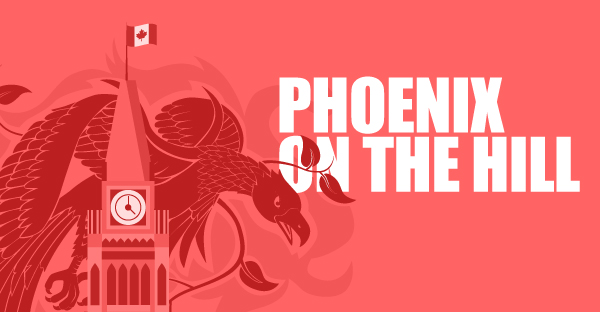 The House of Commons government operations committee met yesterday to discuss the problems with Phoenix, the government's new pay system. About 80,000 public servants have been experiencing issues with their pay – hundreds haven't been paid at all.

“I want to emphasize that it is unacceptable for any Government of Canada employee to go unpaid or to be incorrectly paid for the work performed,” said Lemay.

“Employees are coming to work every day, they are putting in the hours required of them – and sometimes more – delivering services that Canadians require and keeping our country safe and secure. In exchange, they are owed timely compensation to pay their mortgages, to feed their families – and we definitely understand that.”

Several minutes into the meeting, Lemay distributed a freshly-printed calendar of priorities (PDF); the document outlines Public Works’ proposed timelines to address pay issues. The government’s first priority is to rectify pay issues for those receiving no compensation at all. The goal is to address these Priority-One cases within three working days.

At last week’s briefing, Lemay had indicated that there were 720 employees that reported not getting paid. Of those, 486 received a paycheque this week; 139 will be paid on the following payday, August 10. The government is still waiting on information from 35 employees. They also discovered that 60 individuals who weren’t getting paid weren’t in any of their systems.

Since then, 589 additional employees have reported not getting paid. The department is working on 210 of those cases to get them paid by August 6.

Priority-Two cases, which involve employees with pay at risk of disruption, will be addressed within four to six weeks.

Employees who are getting paid incorrectly are expected to have their cases resolved by end of September or October, depending on which category they fall into.

Those who’ve experienced pay issues have had difficulties reaching pay advisors to address their situations. Many employees had to grapple with long wait times – many more simply couldn’t even get in queue. The existing phone system simply wasn’t built to deal with this level of call volume. Since so many calls couldn’t get through, Public Works had no idea of the magnitude of the problem.

The government has addressed this by bringing on board a call centre in Toronto, staffed with agents who will triage calls to get Priority-One cases to pay advisors as fast as possible. Call centre agents have already fielded 2,500 calls, with an average wait time of four minutes and zero dropped calls.

Temporary pay centres are also coming on board to expedite the resolution of these files. These centres, in Gatineau, Montreal, Winnipeg and Shawinigan, will staff close to 200 former pay specialists. The Public Service Alliance of Canada is working with the government to find ways to bring back former pay specialists to join these temporary units.

To further remedy the predicaments of those not getting paid, the government is urging managers to use existing processes to advance emergency funds.

While it seems that the government finally has a robust plan to address the situation, these delays have had some real-life repercussions. Liberal MP Raj Grewal inquired about what compensation mechanisms would be put in place to deal with late payment fees and interest that employees have incurred as a result.

“Everyone should be in a neutral position, if not better. Nobody should be in a worse-off position on a technicality or, in all honesty, [because of] a mistake,” said Grewal.

“I really am focused on the workers, here, to ensure that they’re put in a position that’s equal to – if not better than – where they would have been had this problem not occurred in the first place.”

Lemay explained that Public Works is working with the Treasury Board and unions to develop a process. There are no details yet, but they will be shared as soon as possible.

“We’re asking employees to keep whatever piece of documentation that they can – to keep track of what it’s costing them,” said Lemay. “There will be a process in place.”

According to Lemay, the current Phoenix debacle stems from a confluence of inadequate training and system errors. To address the former, the government will release a toolkit for managers, complete with a tutorial and webinar. The Canada School of Public Service is also developing a mandatory training module for Phoenix.

On the system side, Lemay pointed to a backlog of 20,000 pay transactions that had to be entered into the system at the cusp of Phoenix’s stage-two rollout. Members of the committee also pointed to Public Works’ choice to abandon its original plan for a pilot period in favour of testing the software in 36 departments whose pay services were already based in Miramichi and whose staff was already using PeopleSoft. MPs questioned whether this testing ground, which wasn’t representative of the entire public service, may have created unrealistic expectations for a smooth rollout.

The Phoenix pay system is expected to save the government $70 million per year. Under Phoenix, employees are expected to see their acting pay or overtime payments processed much faster. Public Works estimates that the temporary measures to resolve the current situation will cost between $15 and $20 million.

“The road to transformation has not been smooth,” said Lemay.

Members who are not getting paid are urged to contact Public Works immediately; according to Deputy Public Works Minister Marie Lemay, the department cannot resolve a pay problem unless they are notified of an issue. CAPE stewards and employees are committed to helping any members requiring assistance to resolve their pay situation. Please don’t hesitate to contact us; CAPE has been able to fast-track the resolution of several cases both formally, by filing grievances and informally, using our contacts in departmental pay centres.