Since one of the candidates for the position of EC Director withdrew from the race, the scheduled election to fill the 12 vacancies was cancelled and the remaining candidates were elected by acclamation. The portion of the debate that had been set aside for them was therefore cancelled.

This October 16 event marked two important firsts for CAPE: the Forum was presented on the Internet in a live webcast (members who were unable to attend thus had the opportunity to view the discussions; also, for those who missed it, a recording of the webcast will be available for viewing on CAPE’s website until November 21); and members were able to contribute their comments to the event on Twitter. In fact, members are encouraged to follow the election on Twitter using the suggested hashtag #CAPEelectionsACEP.

Here are a few pictures taken at the event

Emmanuelle Tremblay was the first candidate to outline her vision of the position of President. 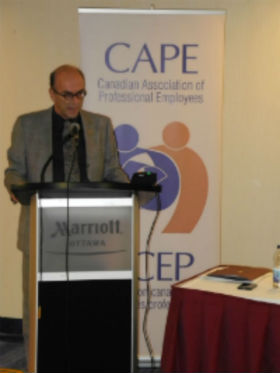 Claude Poirier, the next to deliver his opening remarks, explained why he hopes to be re-elected President of CAPE. 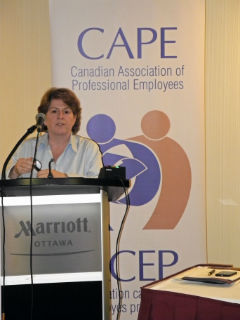 Jackie Tweedie, the third candidate to present her election platform, detailed the actions she would take if she were elected President of CAPE. 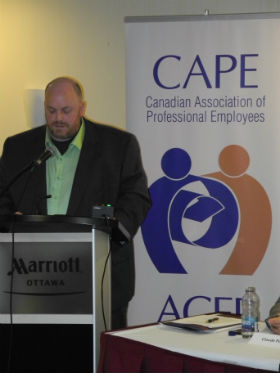 Greg Phillips, the last presidential candidate to speak, explained what his priorities would be if he were elected CAPE President.

Nick Giannakoulis, who is running for the position of EC/LoP Vice-President, described the reasons why he should be elected Vice-President.