May 17 - International Day Against Homophobia, Transphobia and Biphobia 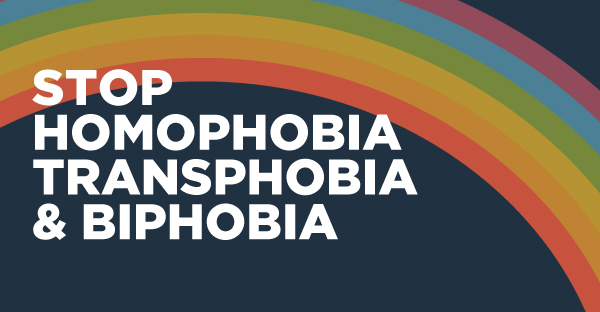 Everyone deserves to feel safe and welcome in their workplace. Sadly, for gay, lesbian, bisexual and transgender employees, fear of alienation, harassment and violence can not only affect their workplace well-being but also prevent them from being their authentic self altogether.

In 2016, a Telus-commissioned study on LGBTQ diversity and inclusiveness revealed that 57% of LGBT Canadians aren’t fully out in the workplace. For these workers, it’s an immense burden; they have to constantly monitor their conversations to ensure they don’t accidentally share details of their personal lives – words as simple as “husband”, “wife”, “boyfriend”, “girlfriend”, “partner”, “he” and “she” can effectively out someone in the workplace.

Though we may not realize it, our sexual orientation and gender identity are peppered throughout our daily workplace conversations. This was clearly illustrated by the Human Rights Campaign’s 2014 study entitled The Cost of the Closet and the Rewards of Inclusion.

Non-LGBT workers often do not recognize that they too have both a sexual orientation and gender identity and that they make casual references to these aspects of themselves constantly. However their status as being part of a majority culture shields them from reflecting on this and being aware of the extent to which they reveal their own identity in the workplace and ask others to all the time.

According to the study, on a weekly or daily basis, most non-LGBT workers will have conversations with their co-workers in which they mention their children (73%), spouses, relationships or dating lives (65%), social lives (84%) and even sex (36%). For LGBT workers who feel compelled to hide their sexual orientation or gender identity in the workplace, these conversations lead to a taxing form a self-censorship.

Indeed, 35% of LGBT employees feel compelled to lie about their personal lives while at work, according to the study.

This form of self-monitoring can be exhausting: “one fifth reports feeling exhausted from expending time and energy hiding their identities and a third felt distracted from the job at hand due to negative workplace environments.”

The study also revealed an interesting dichotomy on the part of the part of non-LGBT employees: while “81% report that they feel LGBT people ‘should not have to hide’ who they are at work”, a majority would feel uncomfortable hearing about an LGBT person’s social or dating life. Further, over 70% of non-LGBT respondents felt that it’s “unprofessional to talk about your sexual orientation or gender identity in the workplace”.

LGBT workers also report hearing jokes and offensive statements about lesbian or gay people (62%), bisexual people (43%) and transgender people (40%). As the Human Rights Campaign points out, “jokes are fair indicators of culture and climate; about what acceptable behavior is, and what is fair game for mockery.”

All of this contributes to a culture where LGBT people don’t feel able to be their authentic selves at work. And for those who do choose to be out at work, they nonetheless have to grapple with fear of harassment, bullying and violence.

Here at home, one third of Canadians don’t feel that their workplace offers a safe and inclusive environment for LGBT employees. For transgender employees specifically, that figure climbs to 45%.

Close to one-third of LGBT Canadians report having “experienced or witnessed homophobic or transphobic discrimination or harassment at work, with nearly half of the incidents going unreported to employers”.

If you are an LGBT employee who is experiencing bullying or harassment in the workplace, we urge you to contact us. CAPE’s labour relations officers are dedicated professionals who are there to help. Violence motivated by anti-LGBT prejudice is a criminal act and should be reported to the police immediately.

If you are interested in fostering a safe and inclusive environment for LGBT employees in your workplace, we encourage you to consult the following resources:

*Though written in 2012, language related to the transgender, two-spirit and non-binary community is evolving quickly. Many of the terms in this booklet are outdated. Also, this booklet focuses heavily on gender-affirmation surgery, which is an option that not all transgender, two-spirit and non-binary people elect to choose. That said, the booklet nonetheless offers valuable information for union representatives who wish to assist their trans and gender-diverse colleagues.