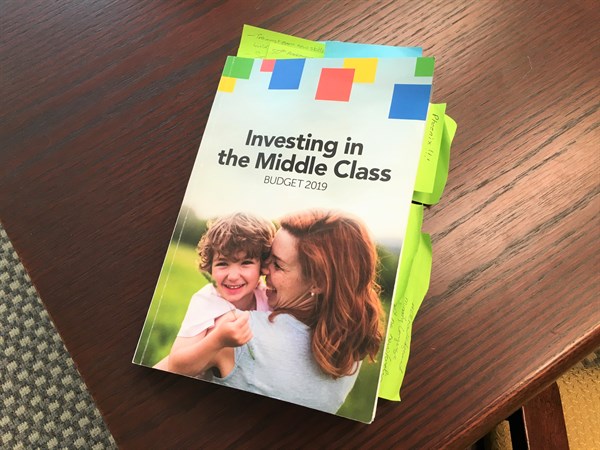 This year’s federal budget was introduced as the “middle class” budget and indeed, the Government did provide incentive and monies to “hard-working Canadians.”  There were not many surprises: the budget aligns with the Government’s values and commitment to supporting the middle class and to creating opportunities for all Canadians to join it, as well as to enjoy the benefits of the common wealth. As this is clearly an election budget, millions of Canadians will have to decide in the fall whether they support the vision behind it.

But what does the budget hold for CAPE members in the workplace? Going through the budget page by page, CAPE looked for social, fiscal and legislative initiatives and measures most likely to impact its members, focusing on issues such as Phoenix, pensions (public service superannuation), employment equity measures and official languages, among many others. In addition, we tried to see whether the budget would affect any departments where we have members, looking for increased funding for new or existing programs, as well as adverse impacts.

Our immediate reaction to the budget is disappointment over what we perceive is a weak response to Phoenix. We are concerned that the funding allocated to replace it and alleviate our members’ suffering is far from being enough. The Phoenix pay system is a sword of Damocles hanging above their heads and an everyday problem that we believe will cost billions of dollars to fix. The budget falls short of our expectations, most notably in the areas of increased staffing to fix the backlog of problems and compensating our members.

Otherwise, while we found a few sections of interest to our members, the budget was light on measures directed at the public service and offered little to no details about how some of the measures announced would translate into the reality of service delivery, as is often the case with budget announcements.

This review should therefore be read as a list of highlights with the understanding that CAPE plans on having a subsequent review of the 2019 budget following a rigorous analysis of the Budget Implementation Act by CAPE’s Analytical Working Group once it is made available.

Until then, we will review some of the sections and issues we found most compelling:

We all suspected it was coming but it was somewhat of a relief to find announced new money invested toward addressing the challenges created by the current pay system including tax-related issues. However, given how much Phoenix has cost the Government and public servants so far, it is hard to imagine the additional funding will be sufficient.

Also, we couldn’t help but notice the absence of any mention of compensation for federal employees impacted by Phoenix. Acknowledging the significant damages caused by this faulty pay system would have been appropriate given the significant financial and mental suffering experienced by many public servants since its implementation. Since the devil is in the details, we anxiously await the Budget Implementation Act to see how and where the money will be spent.

Most of our members pay close attention to any news that can have an impact on their pension, which is one of the most competitive benefits offered by the federal government and must be guarded and protected. To that effect, the budget announced new legislation to increase the surplus limit for the pension plans covering the public service.

We welcome this measure as it reduces risk of increases in members’ contribution to their pension, offering stability and peace of mind as they plan their financial future.

Throughout the budget, we spotted a range of investments that indicate increase to spending in various departments where CAPE has members. The “Other Budget 2019 Measures” section for example, offers a breakdown of smaller investments that could be of interest to our membership and is worth a closer look. But generally, we saw significant sums specifically allocated to Employment and Social Development Canada (ESDC) and Statistics Canada.

CAPE members belonging to ESDC, and more specifically Service Canada, will be interested to know that the Government will provide ESDC with $305.3 million over five years to improve service delivery systems to provide Canadians with the benefits and information they are entitled to in a timely manner.

Given Canada’s steadily growing population, the demand for services delivered by Service Canada is expected to increase, so inevitably, the Government is promising more hires and the adoption of more efficient technology to which we can only respond with some level of skepticism. Let’s just hope CAPE and other unions will be consulted prior to the adoption of these special delivery and technology platforms and systems to make sure we avoid another technological fiasco like Phoenix.

On a separate note, the budget also mentions funding proposed to ESDC to support oversight and assessment of benefit entitlements and detect fraud and abuse, all the while acknowledging its track record of success in recovering overpayments, a well-deserved recognition.

Finally, the Government will give Statistics Canada more responsibilities but also more money. Statistics Canada will receive $11.5 million over five years to manage surveys designed to measure household internet use and access, and to monitor businesses’ online behaviour.  In addition, $1 million investment will be allocated to conduct a comprehensive federal data needs assessment specific to real estate purchases.  Statistics Canada will also receive close to $79 million over seven years to permanently fund the Surveys on Indigenous Peoples and the First Nations Regional Health Survey. These surveys will be conducted under the leadership of the First Nations Information Governance Centre, in collaboration with Statistics Canada. However, CAPE continues discussions with the Treasury Board Secretariat over the continued contracting out of surveys that should be conducted by Statistics Canada.

“When private sector companies collect and control survey data—information provided by our members—we have serious privacy and confidentiality concerns. Statistics Canada has a long history of protecting respondents’ information. Can we put the same trust in private companies who hand over the micro data to the employer? I’m not so sure.” - Greg Phillips, CAPE President.

Last year’s budget came strongly supporting gender equality and the LGBTQ2+ community. This year again the Government did not spare words on its desire to move the needle on this issue. Gender equality is the cornerstone of the current Government, which is well reflected int the many pages of the budget dedicated to summaries of past achievements and future promises.

For one, the budget provides $5 million increased funding to ESDC for the collection and development of better gender and diversity data aiming to improve capacity to better measure, monitor and address gender disparity and promote access of under-represented groups across the Government’s skills programming.

While in 2018, the Government allocated $100 million over five years to support projects that advance gender equality, this year, it is proposing $160 million over five years. This extra funding will, according to the budget, “help tackle systemic barriers impeding women’s progress, while recognizing and addressing the diverse experiences of gender and inequality across the country.”

Some interesting development around the implementation of “gender-based analysis plus” (GBA+) was announced. The budget allocates $ 1.5 million over five years to the Treasury Board Secretariat to work with departments receiving funding from this budget to ensure solid data collection and better reporting practices with respect to gender-based analysis initiatives. We hope this will help the Government deliver on its promise to examine how their plans affect women and men differently, which hasn’t been fulfilled across the federal government. In fact, according to the internal documents, as much as 40 per cent of departments and agencies are not tracking how well they have implemented GBA+ and what effect it might be having. We also took notice of the fact that Statistics Canada and the Department for Women and Gender Equality will be called upon to standardized frameworks and tools for GBA+ disaggregated data collection and reporting.

As for the LGBTQ2+ communities, the Government decided to allocate $20 million over two years starting 2019–20 “to help address the unique needs and persisting disparities among LGBTQ2+ Canadians by investing in capacity building and community-level work of Canadian LGBTQ2+ service organizations.” Furthermore, in 2020–21, an additional $1.2 million will be allocated to the LGBTQ2+ to continue the ongoing efforts. We see this as a good move in the right direction.

The budget proposes to address racism head-on, acknowledging rising intolerance and hateful rhetoric, which is timely and reassuring given the recent tragic events in New Zealand. We should also never forget the acts of hate-based violence that have occurred in Canada. Building on cross-country consultations, the Government is proposing to put money towards the adoption of an Anti-Racism Strategy and the creation of an Anti-Racism Secretariat.

For one, the budget proposes to provide $45 million over three years, starting in 2019–20, to support the new Anti-Racism Strategy. Its key purpose will be to find ways to counter racism in its various forms, with a strong focus on community-based projects, which would include a range of activities such as developing new public education materials or programs that help to build skills and provide leadership and employment opportunities. At the core of this strategy will be an Anti-Racism Secretariat that will work across government to identify opportunities, coordinate activities and engage with Canada’s diverse communities.

Our readers might recall the article we published during Black History Month spotlighting Richard Sharpe talking about the unique struggles of the black community in Canada. On this issue, the Government did not disappoint. In recognition of the United Nations International Decade for People of African Descent, the budget proposes to provide $25 million over five years starting in 2019–20, for projects and capital assistance to celebrate, share knowledge and build capacity in Canada’s vibrant Black Canadian communities. We believe this will cause the Federal Black Employees Caucus to rejoice, as they may be one of the groups to credit for this most anticipated initiative.

*Please note that this review does not offer a complete and in-depth analysis of the budget in all its complexity, but rather offers a quick look at issues of interest to CAPE’s members. Drafted March 19-20.