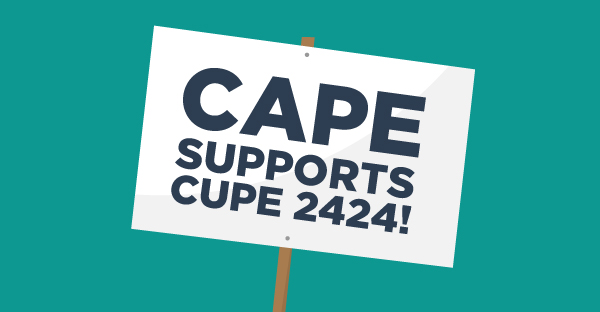 UPDATE: After several weeks of striking, we are pleased to learn that CUPE Local 2424 reached a tentative agreement, which was subsequently ratified by its membership.

Technical and library staff at Carleton University have been on strike for close to a month. These union members, part of CUPE Local 2424, have taken to the picket line in the hopes of protecting their pension rights.

According to the local leadership, Carleton University is looking to give itself the right to unilaterally make changes to pension provisions without the union’s input.

Last Friday, CAPE President Greg Phillips wrote a letter in support of CUPE Local 2424 to Alastair J. S. Summerlee, the interim president and vice-chancellor of Carleton University. In his letter, Phillips – a Calerton University alumnus – expressed his dismay at the university’s actions and urged the employer to work collaboratively with the union.

You can read the letter to President Summerlee here (PDF). For more information, check out CUPE 2424’s website or Facebook page.