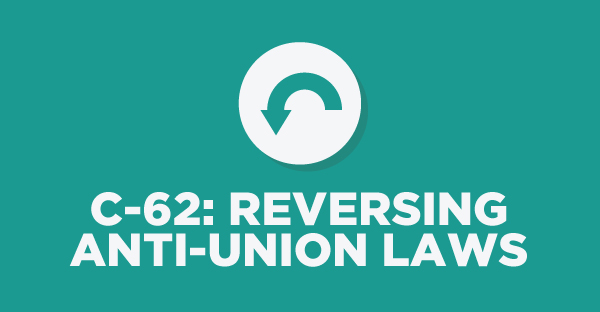 This past Wednesday, President Phillips, along with other union and non-union representatives, had the chance to meet with members of the Parliament to voice their opinion on Bill C-62.

President Phillips started his speech by expressing his content in seeing that the government was finally taking the necessary steps to repeal Bills C-4 and C-59. CAPE felt like this bill was an anti-union legislation that was passed by the former government, expressed Phillips “Under the guise of “modernizing” labour relations, the former Conservative Government attacked the collective bargaining rights of federal public servants on a number of levels.”

Phillips moved on to explain why Bill C-4 was problematic in many respects. This bill provided the government with undue leverage in the collective bargaining system in everything from the negotiation of essential services agreements to public service recourse procedures. “Bill C-4 took away the rights of bargaining agents to choose between the arbitration or conciliation/strike routes as a process for resolving collective bargaining disputes.” In CAPE’s case, it took away our right to arbitration, a process that had always worked well for CAPE and our members. This left us no choice but to move towards the conciliation/strike route, said Phillips. “Additionally, the former government even compromised the arbitration and conciliation processes by imposing new factors that arbitrators and conciliators had to consider when making a recommendation or award.”

Phillips proceeded to talk about Bill C-59, an attack on the sick leave and disability programs of public servants. What was even more alarming was that it gave the government power to do so unilaterally, by completely skipping the bargaining process altogether. CAPE, along with many other federal public sector unions, felt that this legislation denied its members’ their fundamental rights under section 2(d) of the Charter, explained Phillips. It did not allow for meaningful collective bargaining with regard to these key workplace issues. Therefore CAPE challenged the constitutionality of that legislation by actively participating in a case before the Ontario courts.

This bill not only affected members of different bargaining agents such as CAPE but also everyone who works in the federal public service. “CAPE is disappointed that this bill fails to address some of the problems which have plagued the federal public service labour relations regime since even before Bills C-4 and C-59 such as the lengthy delays in getting cases to adjudication. This would have been an excellent opportunity for the government to tackle this important access to justice issue” said Phillips.

During his speech, Phillips raised the point that while Bill C-62 is amending the Public Sector Equitable Compensation Act (PSECA), it is only a housekeeping provision which re-established the procedures pertinent to arbitration and conciliation that existed before December 31, 2013. CAPE would’ve liked to see the government take this opportunity to fulfil its commitment by completely removing PSECA and replace it with a pro-active pay equity scheme. “PSECA is a regressive piece of legislation which is a major step backwards from the concept of equal pay for work of equal value and significantly interferes with the rights of federal public sector employees by denying them human rights protections for systemic gender discrimination in pay.”

On a more positive note, CAPE is pleased to see that this bill undoes virtually all of the difficulties created by Bills C-4 and C-59. “CAPE looks forward to returning to a labour relations system which is not perfect, but is much more fair and balanced.”

CAPE is hopeful that this bill will go through the legislative process as quickly as possible in order to help restore the balance in labour relations in the federal public sector.

Our complete testimony before the House of Commons Standing Committee on Human Resources, Skills and Social Development and the Status of Persons with Disabilities is available here (PDF). You can also listen to the hearing on Parlvu.