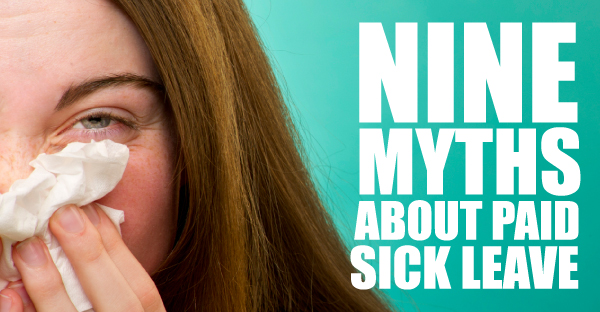 In the wake of the recent moves by the government, here's a look at all the myths they keep repeating about paid sick leave.

A PDF version of all nine myths is available to share with your colleagues and friends; these myths need to be debunked.

Myth 9: The Conservative government would never try to mislead you. 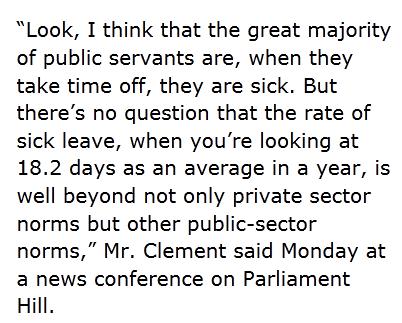 Reality (from the Parliamentary Budget Office):

Myth 8: The Conservative government knows how to manage.

Reality: Simply on the matter of sick leave, the numbers provided by the Conservative government show that significantly more public service employees have been off work sick under its management. Comparing the period of four years that predates this conservative government to six years it has been in power, the average proportion of public service employees who have taken paid sick leave has gone up by 3.7%. 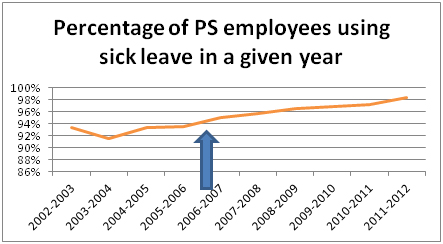 Since the conservative government started managing the public service in fiscal 2006-2007, the increase has been almost 5% when comparing fiscal 2011-2012 to fiscal year 2005-2006, the period immediately before the Conservatives’ rise to power. Expressing this increased number of sick days in number of full time employees, the additional days of sick leave is equal to 0.7% employees off sick, all year round. During the last six years, the public service has become a very unhealthy workplace for many reasons, resulting in possible negative effects on productivity. And it’s only getting worse.

Myth 7: Service unions protect interests that are not reasonable and fair to taxpayers.

Reality: It’s true that the role of a public-sector union is to defend its members. Who else will defend them? But only short-sightedness can explain why a government equates fairness for employees with unfairness for taxpayers. The truth is that public-sector unions have provided the government with many inexpensive ways of dealing with the problems created by the disjointed sick leave system and long term disability plan. In fact – and contrary to what was said by Treasury Board President Tony Clement – union representatives worked for months with management representatives. The recommendations that flowed from this collaboration would be less expensive to taxpayers than what the government appears to be planning. However, talks broke down when the government said the only options it would consider would be a short-term disability plan managed by a private insurance firm.

Myth 6: Public service employees are vulnerable under the current system because they don’t have enough accumulated sick leave to bridge the 13-week waiting period required to qualify for long-term disability benefits.

Reality: The 2014-2015 budgets give the impression that the current system is bad for tens if not hundreds of thousands of public service employees. The government contends that 65% of public service employees, approximately 150,000, don’t have enough credits to bridge the waiting period. Whether this figure is accurate or just another myth is irrelevant. The fact is that only 2,876 claims for long- term disability were approved in 2012. That year, 770 claims were rejected and the total number of active claims that were approved over the years amounts to less than 12,000 cases.

The question that taxpayers should ask themselves is whether it’s fiscally responsible to impose something as expensive as a short-term disability plan to address a situation that affects less than 2% of public service employees? Yes, we are prepared to believe that more than 65% of public service employees don’t have enough sick leave credits to carry them over the waiting period to long-term disability benefits. But they don’t need those credits; less than 2% do.

Reality: The fallacy of this statement has been demonstrated several times by reliable independent analysis. The Parliamentary Budget Office has demonstrated that this is false:

A report from Statistics Canada did the same. When comparing apples to apples – the same kind of workers in the public and private sectors – we find that there is an insignificant difference in the number of days employees are absent from the work place for reasons of illness or injury. To be clear, it amounts to 0.8 days, or 6 hours per year.

Myth 4: The government and its public service managers have no control over sick leave and its costs.

Reality: A public service employee accrues sick leave credits if they meet the conditions defined in their collective agreement. But the employee can only take sick leave when they meet the conditions required for taking sick leave; these include “satisfying the employer” that he or she is “unable to perform duties as a result of illness or injury” and satisfying the employer “in such a manner and at such a time as may be determined by the employer…”. Employees do not decide whether they can take sick leave; managers decide. Or, by extension, the government decides.

Employees do not decide whether they can take sick leave; managers decide.

Myth 3: It is easy to determine the fiscal liability created by sick leave.

Reality: First, it’s interesting to note that the notion of fiscal liability for matters such as sick leave was created by the Conservative government. Prior to the 2012-2013 Conservative budget, there had never been an attempt to measure what kind of “liability” would accrue from public service collective agreements, including sick leave provisions. Why? Probably because, like most matters governed by collective agreements, it would be impossible to provide a reliable figure. There is the issue of the reality behind myth number 1. In addition, public service employees often leave the public service with large banks of sick leave credits that they have never taken and will never take. All these sick leave credits cost the employer and taxpayers a total of 0$. They are on paper and are erased without any form of monetary compensation going to the employee.

Myth 2: Taxpayers pay for every single day a public service employee is away from work for reasons of illness or injury.

Reality: As explained with Myth no. 1, when a public service employee takes one, or two or three consecutive days away from work due to illness or injury, their work waits for their return to get done. While this isn’t the case for all public service employees (correctional officers, border officers and other public service employees who work directly with the public or a clientele are often replaced when sick), it is true for the vast majority. This type of short absence due to illness is usually the type of sick leave for which no medical certificate is requested by a manager. However, when an absence lasts for a week or several weeks, or when an employee is forced on long-term disability for reasons of illness or injury, then a medical certificate is normally required. These longer absences from the workplace are absences that incur a cost because the employee won’t be able to make up the lost upon their return.

On average, sick leave requiring medical certificates accounts for less than one-third of all sick days. The other two-thirds were taken mostly in circumstances where no additional costs were incurred.

What are the Conservative government’s numbers regarding certified and uncertified sick leave absences? After all, these would give some indication of the actual cost of sick leave. According to the government’s numbers, the average number of paid sick days taken in the federal public service in fiscal year 2011-2012 was 11.5 days. Only 3.8 days on average, or less than one third of the total average, were sick-leave days where management required a medical certificate. The other 7.7 days were taken mostly in circumstances where no additional cost was incurred from the absence of ill or injured employees. Again, we underscore that the imperfect correlation between sick days where no medical certificate is required by management and sick days where no actual cost is incurred. But, it is further indication that the current’s system true cost to taxpayers is only a small fraction of what is being suggested by the Conservative government. It’s significantly less than the average of 11.5 days per year.

In most instances, when an employee is absent, their work isn’t done. The work waits for them to return to work.

Reality: The sick leave provisions in public service collective agreements are there to guarantee revenue continuity in instances where an employee is ill or injured and can’t report to work. Typically, sick leave is used for one, or two or three consecutive days, when an employee misses work due to illness. In most instances, when an employee is absent, their work isn’t done. The work waits for them to return to work. More often than not, the employee does the work by intensifying his or her pace of work or working for for free at the end of the day or on a weekend. Some instances of sick leave do translate into a cost, but the numbers used by the Conservative government grossly exaggerate the real cost of absences due to illness and injury.

Nine Myths on Paid Sick Leave, download and share the full PDF version. Don’t hesitate to share with your colleagues; these myths need to be debunked.