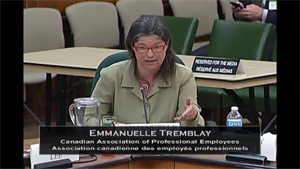 National President Emmanuelle Tremblay was on the Hill on June 4th, delivering testimony to the House finance committee about the false premises underlying Bill C-59. The Conservative government is trying to use its budget implementation bill to bypass the collective bargaining process and impose changes to sick leave provisions in the public service.

Tremblay got right to the point: Bill-59 violates the freedom of association clause of the Canadian Charter of Rights and Freedoms.

“C-59 isn’t an isolated attack; it’s part of a concerted effort to change the rules governing collective bargaining,” she said.

Indeed, public-sector unions have been battling one attack after another. In December 2013, the government enacted Bill C-4, which effectively took away the right to arbitration for most bargaining units in the public service.

Tremblay told MPs that the proposed legislation before them is an attempt to stop union members from exercising their legitimate right to collectively bargain – a right, she reminded them, that is recognized by the Supreme Court.

“In addition to denying them their fundamental rights, the government is proposing an approach that is unfair for employees and unjust for taxpayers,” declared Tremblay. “The government is pretending that it can generate ‘savings’ from what amounts to an unfunded liability on its books; it is also failing to take into account the costs associated with this new compensation system.”

Tremblay concluded her fiery testimony by emphasizing the union’s willingness to negotiate in good faith.

“This government contends that it is simply trying to modernize their employees’ sick leave plan. If that’s their goal, we’re on board. And we can reach that goal without C-59 – without bypassing free and fair collective bargaining – without changing the rules of the game.”

You can read CAPE's brief.