We hear you! Your thoughts on a possible strike vote

In 2013, the federal government legislated away, (through Bill C-4), the right for a union to choose a dispute resolution method should there be an impasse at the bargaining table.  Binding arbitration is no longer an option for CAPE, and the default conciliation/strike option may force CAPE to conduct a strike vote.  A strike under the Public Service Labour Relations Act is defined as: “a cessation of work or a refusal to work or to continue to work by persons employed in the public service, in combination, in concert or in accordance with a common understanding, and a slow-down of work or any other concerted activity on the part of such persons that is designed to restrict or limit output”.

A positive strike vote is important leverage for a union to conclude an agreement before contemplating any form of job action. It is more a measure of the support members put behind their bargaining team. The strike vote also allows an escalation of job action that may or may not require a cessation of work and associated loss of income.

In anticipation of the possibility of a strike vote, in January CAPE prepared a series of questions and gave its 8,549 members registered to receive e-communications the opportunity to provide their views on this subject. A total of 3,338 members took the time to answer the questions online, which represents a 39% response rate. As a matter of comparison, the CAPE National elections had a 15% participation rate and the last dues increase vote had a 37% participation rate. 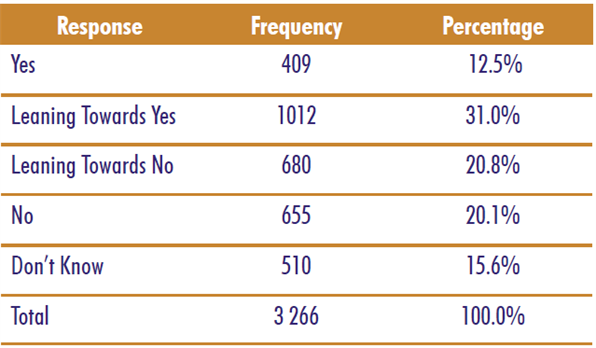 The three most important reasons for our members’ hesitation to vote in favour of a strike are:

It is clear by the responses that CAPE members need more detailed information about how a strike would work (the range of possible activities job action might involve, strike pay, what other unions are planning to do, etc.) and CAPE’s approach to the Employer’s proposal on sick leave (what members would lose if the current plan is replaced).

It is not surprising that a significant proportion of those who provided comments were not in favour of a strike for various reasons: financial, political, or belief that a strike would either not work or would backfire in the realm of public opinion. We will work in coming weeks to address these concerns directly.  Meanwhile, a significant proportion of respondents are engaged and would support job action, not necessarily a strike, but a strike if necessary.