The Conservatives are challenging public servants to strike

During the first 46 years of their right to organize and bargain collectively, from 1967 to 2013, federal public service employees had the option of choosing between two different processes for resolving impasses at the bargaining table.

The first of these two processes took the form of a hearing before an administrative tribunal – a process commonly referred to as arbitration. Under this formula, an impasse brought to arbitration is resolved on paper through a decision reached by an arbitration board. That decision is binding on both parties.

The second process was a consultation before a conciliation board, which did not produce a binding decision but rather issued recommendations designed to help the parties come to an agreement. If the parties remained unable to agree after those recommendations were issued, the union side would normally put the matter to a strike vote among its members. The subsequent scene often played itself out on the street, with employees engaging in various forms of job action. 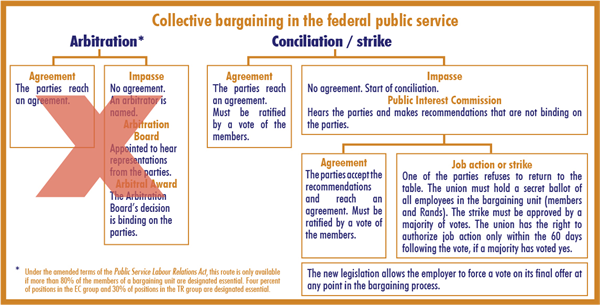 With the passage of time, however, we have forgotten that, as recently as 1966, there was no choice available to public service workers; arbitration was considered the only acceptable option in the public service and strike action was definitely out of the question. The Report of the Preparatory Committee for Collective Bargaining in the Public Service (the Heeney Committee Report), published in 1965, preferred arbitration and was not in favour of giving public servants the right to strike; most if not all of the associations representing public service workers prior to unionization shared this view. Arbitration was the only word on everyone’s lips. In fact, in the discussions surrounding the bill that would propose giving federal public service employees the right to unionize, arbitration was the only mechanism mentioned for resolving deadlocks at the bargaining table. So what happened?

Indeed, only one public service employee association supported the right to strike over arbitration. The Canadian Postal Employees Association staged an illegal wildcat strike in 1965 that ultimately led to the passage of Bill C-170, tabled in the House of Commons in the spring of 1966 and enacted in 1967, which became the Public Service Staff Relations Act (PSSRA) and subsequently the Public Service Labour Relations Act (PSLRA).While it did not discard the popular option of arbitration, this legislation would henceforth give public servants the right to strike. Thus unions representing public service workers were given a choice between arbitration and strike action to resolve impasses at the bargaining table. The issue was debated extensively by the Parliament of the day and has since come up in numerous parliamentary debates. Part and parcel of employee rights since federal public servants first gained the right to unionize, the right to choose between arbitration and conciliation/strike action largely defines and has always provided the framework for collective bargaining in the public service.

In the fall of 2013, however, the Conservative government – which has tabled a number of anti-union bills in recent years – took away the unions’ right to make that choice. When Bill C-4 received royal assent in December 2013, the PSLRA was amended to eliminate public service workers’ right to choose. In the current round of collective bargaining, therefore, it is the employer’s contention, based on its interpretation of the applicable legislation, that federal public service workers must strike if they reject the employer’s proposals at the bargaining table. So 46 years of history has suddenly fallen by the wayside. The right to choose has been taken away, and strike action is the only recourse open to unions unwilling to accept what the employer is offering.

And that brings us to where we are today. The groups represented by CAPE are facing a new set of ground rules in the current round of collective bargaining. Whereas CAPE’s members had previously always opted for arbitration to resolve impasses at the bargaining table, the employer/legislator will now force them to engage in strike action if they refuse what the employer is offering.