Print the PDF version of the bulletin and post it on your union board! 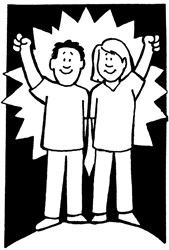 CAPE has been meeting regularly with PSAC and PIPSC to discuss our respective negotiations and to coordinate our mobilization and communications efforts. Our next bulletin will go into further detail about these preparations.

One activity already underway is a monthly demonstration or other mobilization activity to show our unity and strength in numbers.

March 19 will be a day of action in all federal government workplaces across the country. Mark that date on your calendar, and ask your local how you can get involved now in planning the right activity for you and your coworkers!

As the collective bargaining process moves forward, CAPE will be sending you confidential information on the progress of negotiations as well as ideas for mobilization.

It goes without saying that such messages cannot be sent through the employer’s email system. Effective March 31st, therefore, we will stop sending information on bargaining and mobilization to email addresses provided to you by the employer.

To update your contact information, go to this page on our site and immediately or participate in one of your Local’s mobilization activities.

Activities in the Locals - CAPE members on the move

To prepare for any eventuality during the current bargaining and mobilization period, CAPE’s Locals have begun a series of public events to inform, mobilize and take the pulse of members.

Organized by individual CAPE Locals or in collaboration with other CAPE Locals or with other public service union Locals, these activities constitute excellent opportunities to remind members that the rollbacks in terms and conditions of employment proposed by Treasury Board would affect each and every one of you. Here are just some of the activities organized recently. Don’t forget to tell us about your own activities by writing to: information@acep-cape.ca.

Despite the best efforts of your Local Leaders and the members of CAPE’s various committees, no one knows better than you, the members of CAPE, how to push the right buttons that will draw the attention of your fellow members and encourage them to lend a hand. At the local, regional or national levels, either alone or with others, share your ideas for the success of negotiations by holding mobilization activities that will make it clear to our employer that we want to improve our terms and conditions of employment – not lower them.

If you have tested an idea in your workplace or witnessed the success of a project organized by your friends, co-workers or family members, please do not hesitate to let us know about it so we can pass that information along to the rest of CAPE’s membership. Who knows, you may start a landmark movement – one that will be trending on social media.

Send us your ideas by email information@acep-cape.ca or 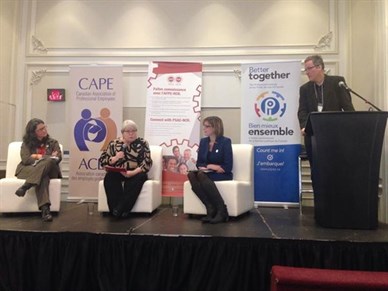 Organized jointly by these three federal public service unions, the Democracy School reviewed the core values that underpin a strong democracy, the role of unions in supporting democracy, and the ideologies and policies of the various federal political parties as well as their impact on workers and citizens; it also sought to prepare participants to intervene strategically in the political arena.

Among the various lecturers, Judy Rebick discussed the impact of the politics of austerity on democracy, Robert Fox of Voices-Voix spoke about the consequences for public service workers of the Conservatives’ politicizing of the public sector, and Michael Harrington of the Chicago Teachers’ Union described strategies for countering austerity measures.

In addition, the Presidents of the three unions, Robyn Benson (PSAC), Debi Daviau (PIPSC) and Emmanuelle Tremblay (CAPE), held a panel discussion on the various ways in which the present government is attacking public service workers and their unions.

Picture: Emmanuelle Tremblay, Robyn Benson and Debi Daviau during a panel discussion on attacks by the Conservative government.

CAPE will soon be addressing its information messages only to members’ personal email addresses to avoid having its emails blocked or filtered out by the employer. Several Locals have already mounted successful efforts in this regard. For example:

The Statistics Canada Local 503 specifically assigned a member of its executive to meet with members in order to update its information lists. In addition, a campaign to canvass Rands (employees covered by the collective agreement who are not registered members of the union) reduced the proportion of Rands at Statistics Canada to only 3% – the lowest Rand rate among all CAPE Locals.

At Infrastructure Canada, Local 516 combined information sessions with the establishment of a discussion structure in order to encourage member participation. The results were extremely positive, as the Rand rate was reduced from 50% to less than 10%.