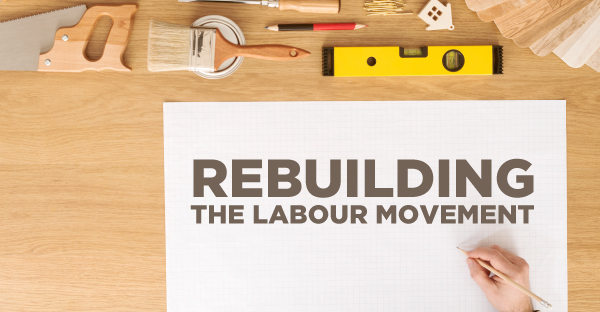 This is the third article in a three-part series on the historical role of unions in Canada and the contemporary challenges we face in th labour movement. The first installment explored the important historical role unions played in creating a fairer, more equal Canada (Mobilization Bulletinno. 4); the second article looked at the longstanding attack on labour rights, particularly in the public sector (Bulletin no. 6). This piece argues that, even with a more conciliatory government in power, CAPE and other public sector unions must continue to develop their collective capacity to restore the gains of the past.

Since the 1980s, trade unions in both the private and public sector have faced significant attacks on collective bargaining rights by employers and governments from across the political spectrum. These attacks, which have shaken the foundations of the social compromise that underpinned the postwar order, have occurred at both the provincial and federal level (see note). The recent victory of a government that has promised to repeal elements of the more regressive labour legislation of the last several years allows for a certain degree of cautious optimism. But how far this government will go is still unknown (it is unclear, for example, whether it will restore the right to arbitration). Will it be able to withstand economic pressures and the power of business groups to set much of the policy agenda? What will happen in four years? The attack on labour rights is longstanding, and it is clear that reversing the tide will require nothing less than a reinvigorated labour movement.

Fighting Back: Political and Legal Strategies

Labour unions have responded to the systemic attacks against labour rights through a variety of strategies. This diversity of approaches reflects the fact that the offensive against organized labour has not been confined to the workplace, but part of a broader political trend with multiple dimensions. In the political realm, unions have campaigned against reactionary governments, often in collaboration with other groups. Historically, many labour unions officially supported the NDP, though that support began to decline in the 1990s and early 2000s as many provincial NDP governments cut social spending and undermined labour rights. Labour centrals increasingly moved towards advocating strategic-voting in elections. During the most recent federal election, for example, the Public Service Alliance of Canada’s “Vote to Stop the Cuts” campaign, encouraged electors to vote for candidates who opposed further cuts and sought to restore public services. While such campaigns send an important signal that social democratic parties cannot take labour support for granted, they do little to build the organizational capacity and confidence of unions over the long term. The actual effectiveness of strategic-voting is also unclear.

Legal-based strategies have also been advanced to defend labour rights against the actions of employers and governments. In the past, such strategies have often met with failure. For example, for nearly 30 years, case law had established that the guarantee of freedom of association in the Canadian Charter of Rights and Freedoms did not protect strike activity. But in a sign of the times, the Supreme Court recently struck down a Saskatchewan law preventing public-sector employees from striking as unconstitutional. In Saskatchewan Federation of Labour v. Saskatchewan (January 2015), the Supreme Court of Canada found, for the first time, that Canadian workers have a constitutional right to strike. But legal-based strategies also have their limitations since trials can be long and outcomes uncertain. More importantly, union members are not typically engaged in these struggles, which do little to build their collective strength and their ability to fight back against immediate offensives.

Recovering the Traditions of the Past: Developing Collective Power

Thirty years of labour attacks suggest that the task of restoring a fairer and more equal society will require much more than strategic voting or legal challenges. Indeed, the labour victories of the past were predicated on the mass actions of workers acting in solidarity with each other, and a successful strategy will once more depend upon a larger shift in the balance of power in society. Governments of all stripes will continue to cave to the pressure of business lobbies and economic elites in the absence of strong coalitions bringing together labour unions and citizens groups to defend the interests of ordinary Canadians. CAPE must join the wider labour and social justice movement and contribute to these collective efforts – not only to ensure the rights of our own members, but to support the development of a fairer society.

Note: For example, as per According to the Canadian Foundation for Labour Rights, there have been 46 pieces of legislation passed in the federal Parliament and provincial legislatures since 1982 that have suspended the collective bargaining rights of public sector workers.