The labour movement and the fight for a fairer Canada: An historical perspective

This article, the first in a two-part series, looks at the important historical role unions have played in creating a fairer, more equal Canada.  A follow-up piece will look at public sector unions and the challenges they face today in defending a decent standard of living for all Canadians.

With inequality steadily on the rise, the importance of labour unions is once again becoming widely recognized.  The majority of Canadians hold favourable views of unions, with 70 percent agreeing that they are still needed.*  Even those not known for their pro-labour views have been forced to acknowledge, as one IMF study recently found, that high unionization rates provide a brake on inequality and ensure a fairer distribution of income.**

In Canada, the labour movement has always been a driving force behind the creation of a fairer and more equal society.  But the rediscovery of the importance of labour unions has come on the heels of decades of attacks by federal and provincial governments.  As public sector unions find themselves in the midst of a new round of collective bargaining, it is worth remembering what strong unions have meant for all Canadians in the past and what mobilizations have helped to achieve. 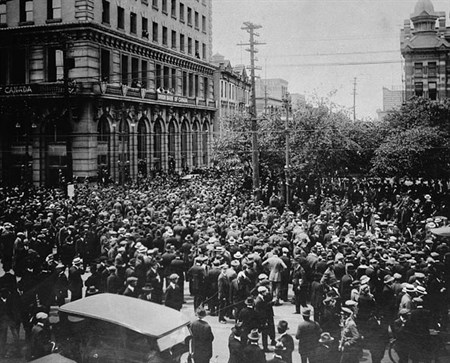 Labour unions initially formed to protect workers from the ravages of industrialization in the mid-nineteenth century, though they were not legally recognized until a wave of strikes in Ontario and Quebec prompted the federal government to pass the Trade Unions Act in 1872 (the mobilizations centred on the demand for a nine-hour work day).  In the decades that followed, unions began to exert more influence as they established themselves in nearly all regions of Canada, formed new alliances and coalitions, and pressed for significant reforms, such as restrictions on child labour.  By the late nineteenth century, labour unions began to organize across industrial sectors – often on a continental basis – and became increasingly difficult to ignore.

The majority of unions, however, continued to represent workers by craft rather than industry, a tendency that fragmented the labour movement and significantly reduced the bargaining power of workers.  Governments also provided employers with armed-strike breakers upon request, and the federal government restricted the efficacy of collective action by requiring some groups of workers (like miners and railway workers) to go through a period of ‘conciliation’ before they could legally strike (this was done through the Industrial Disputes Investigation Act of 1907).  Conciliation became the new model for many workers, even though employers were still free to ignore the unions.  Living conditions for the vast majority of workers were appalling until the shock of the Great Depression led to a more militant, organized labour movement.

The labour struggles of the 1930s and the postwar economic expansion that followed ushered in a new period of social compromise and shared prosperity.  A new wave of industrial unionism swept North America, and actions such as the Oshawa Strike in August 1937 helped secure the rights of workers.  The unions also played a key role in supporting the demands of unemployed workers for employment insurance, a reform finally achieved in 1940.  The ‘industrial unionism’ of the period began to merge with ‘social unionism’ as labour unions recognized the important role they had to play as a force for progressive social change.  Perhaps the most significant mobilization of this period was the Ford strike in Windsor, Ontario, in 1945, which resulted in the landmark decision by Justice Ivan C. Rand, granting a compulsory check-off of union dues.  The outcome of the strike also helped to secure the principle that workers should share in the profits associated with increased productivity.  By 1948, the Industrial Relations and Disputes Investigation Act (1948) protected the workers' right to join a union and required employers to recognize unions chosen by their employees. The labour movement was further strengthened with the formation of the Canadian Labour Congress in 1956, which brought together the three main union federations of the time.

In the public sector

Yet workers in the public sector remained disorganized in the decades following the Second World War despite their growing importance to the economy and society.  With the exception of Saskatchewan, which gave provincial employees union rights in 1944, public employees only gained collective bargaining rights similar to those of other workers in the mid-1960s.  Following an illegal national strike by postal workers, the Public Service Staff Relations Act (1967) established a collective-bargaining regime in the federal public service for the first time.  Most federal government employees would eventually become members of the 150 000-member Public Service Alliance of Canada.  The Canadian Union of Postal Workers, for its part, would go on to play an important role in improving the lives of all Canadians, achieving collective-bargaining breakthroughs such as paid maternity leave, premium pay for weekend work and the right to bargain on technological change.

At the same time, however, workers in the federal public-sector were constrained by the provisions they could negotiate in their collective agreements.  Important areas such as pensions, for example, were excluded from collective bargaining.  The existence of multiple unions in the public sector (there are currently 18, including CAPE, which was created as the result of a merger of the former Social Science Employees Association and the Canadian Union of Professional and Technical Employees in 2003) further hampered coordinated, collective action, much in the manner of the craft unionism of an earlier period.  Despite these weaknesses, the decades that followed saw a great expansion in public-sector programs and services that coincided with a tremendous upsurge in union membership in the federal and provincial public sectors.  Decent working conditions in the public sector were closely tied to strong services for all Canadians.

The 1990s brought with it new challenges for Canadians as federal and provincial governments cut social services and laid off public sector workers.  Changes in the global economy and the rise of neoliberal ideology have fuelled rising inequality.  Anti-union legislation and concession-bargaining on the part of labour unions have further eroded wages as income gains have become increasingly concentrated.   Reversing this situation will require the concerted action of all labour unions and their progressive allies.  The second article in this series will look at the current challenge in greater depth, and the role that public sector unions have to play in stemming the tide.