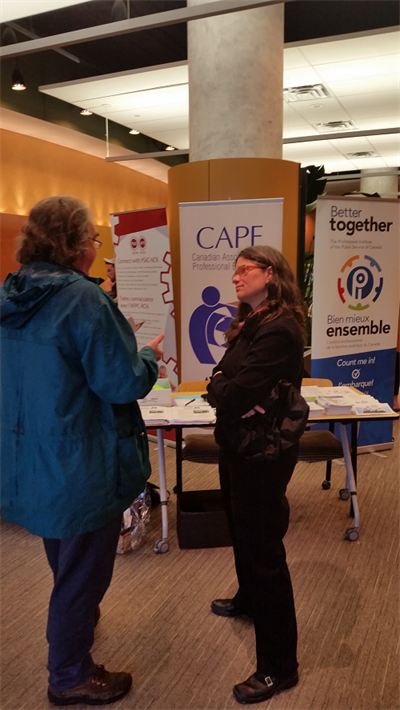 The weather was not the best for the public-service-wide day of mobilization on April 20. Nevertheless, in the National Capital and in several other regions, members of CAPE, PSAC and PIPSC got together to inform their fellow union members about the issues facing them in the workplace.

The theme for the day was spring cleaning. This was the eve of the 2015 federal budget, and members were encouraged to think about and express their opinions on key issues such as mental health, cutbacks in the public service and the importance of having a safe and healthy work environment. Discussions also revolved around sick leave and the federal budget.

For the April mobilization day, the organizing committee decided to set up information tables in a number of workplaces in Ottawa-Gatineau. The office complex at 70 Crémazie (which houses Translation Bureau and Passport Canada employees) was clearly the leading hot spot for discussion and exchanges between members and their elected representatives. Members here sampled maple taffy as they engaged in discussions and had the opportunity to meet with CAPE President Emmanuelle Tremblay.

A number of public service union members also participated in May Day marches and activities. More than 2,000 people took to the streets in Gatineau, and about 900 workers attended a rally in front of the Prime Minister’s Office in Ottawa.

The federal public service unions are already working to organize activities for May 19, when the focus will be on scientific and analytic integrity and collective bargaining. The day’s activities will be listed on CAPE’s website, and we urge our members to participate!