Strike vote demystified: If I vote "Yes" to a strike mandate, does it mean there will be a strike? 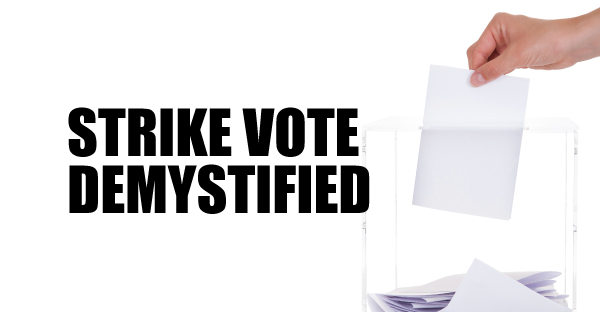 If I vote "Yes" to a strike mandate, does it mean there will be a strike?

Voting yes to a strike mandate essentially means giving your union the ability to put escalating pressure on the government to reach a fair collective agreement.

In the federal public service, the default dispute resolution process at the bargaining table is conciliation, a process that can
lead to employees having the right to strike under certain prescribed conditions. That is why it is often referred to as the
conciliation/strike route. A public interest commission (PIC) may be established to conciliate the matters in dispute. If the parties
do not reach a collective agreement after receiving the PIC's recommendations, the bargaining agent can declare or authorize a strike provided:

ECs and TRs who are assigned to a position that has been identified as providing an essential service are prevented from striking.

What is a strike? Under the Public Service Labour and Employment Relations Act a strike is defined as a coordinated cessation of work or a refusal to work, a slow-down of work, or any other concerted activity designed to restrict or limit output. For instance, a strike mandate might result in working-to-rule or rotating pickets.

The 2013 strike led by the Professional Association of Foreign Service Officers, as seen in the timeline below, illustrates how union members can escalate the pressure to reach a fair settlement.

PAFSO’s job action was not systematic, but it was strategic and it targeted priority files of the day. While 0members were technically in a strike position for over five months, there was only one half-day where the headquarters’ DFATD membership walked off en masse. As for the rest, it varied. Some members were never off work, while others withdrew their services for weeks; in some instances continuously,
in others, only a few days at a time. The key element that allowed for this nimbleness was the depth of PAFSO’s strike fund, which ensured that employees were fully reimbursed for the days during which they withdrew their services.

The PAFSO strike at a glance