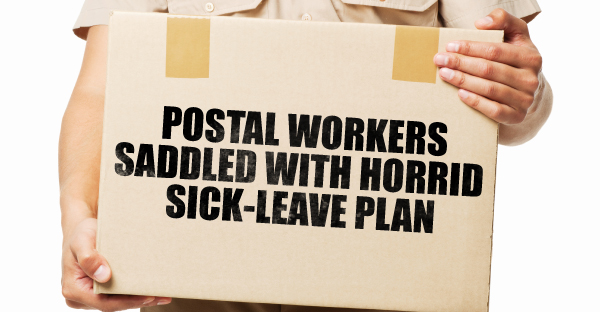 As we brace ourselves for a tough fight over sick leave, postal workers paint a grim picture of the raw deal this government is peddling. During their last round of negotiations, they were ultimately forced to accept a plan that gutted their sick leave. In its place: a short-term disability plan and seven personal days.

“It’s been an absolute disaster for our members. There’s no other way to put it,” said Mike Palecek, president of the Canadian Union of Postal Workers.

They were among the first to butt heads with this Conservative Conservative government. After staging rotating strikes in the early days of June of 2011, Canada Post announced a lock-out on June 14. Immediately after, the government announced its intention to force workers back to work through legislation. The New Democrats fillbustered the bill for an astounding 58 hours, the longest filibuster since 1999, but ultimately the bill passed and Canada Post employees were forced back to work on June 27.

The legislation also bound the union to a final-offer selection; the arbitrator would be forced to pick the government’s offer or the union’s offer, in its entirety. No amendments. No negotiations. According to Palecek, Canada Post put forward their worst offer. Worried that they’d be saddled with that raw deal, the union chose to return to the bargaining table – under the circumstances, these negotiations could hardly be described as free and fair.

“The union leadership negotiated a collective agreement with a gun against their head – and it gave way to a lot of stuff, including sick leave provisions,” explained Palecek.

Since then, members have had to grapple with a nightmarish sick leave plan. “People are being turned down for leave that they’re
entitled to take,” said Palecek. “We’re hearing about members losing their homes – all kinds of horror stories.”

This is the likely outcome of dealing with a third-party insurance company; their profit motive conflicts with their duty to pay employees the benefits that they deserve. In the end, workers pitted against a private  insurance company are the losers. But that won’t stop the government from pitching the plan as something that will benefit its employees, Palecek warned.

“It’s all garbage. They’re selling you a bill of goods.”

The union is hedging its bets on the 2015 election; it’s their best shot at reversing course, both on the benefits front and on the government's plan to end door-to-door delivery. Palecek encouraged all union members to get involved: to vote, to work on campaigns, to put a lawn sign on their property. No matter the outcome, CAPE members will need to hold the government to account.

“We have 124 days to bring down the Stephen Harper government. We’re looking forward to having 0a government that we can actually negotiate with.”