CAPE Members made their voices heard at Monday demonstrations 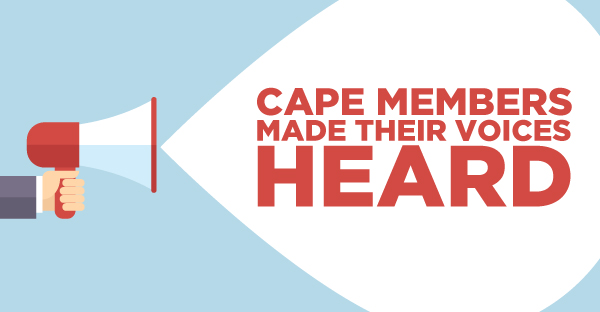 Activists with the Canadian Association of Professional Employees, the Public Service Alliance of Canada and the Professional Institute of the Public Service of Canada organized demonstrations on four consecutive Mondays to protest Bill C-59. The number of participants protesting the legislation during these lunchtime demonstrations grew from about 100 on May 25 to more than 300 on June 15, despite some miserable weather conditions.

In light of their members’ exposure to similar treatment, the presidents of other unions made appearances at these demonstrations to express their support for public service workers. On June 1, the president of the Association of Justice Counsel, Len Mackay, reminded participants how important it was to stand up to a government that has a knack for pushing through bills that violate the Canadian
Charter of Rights and Freedoms. Meanwhile, Dan Maxwell, the president of the Ottawa-Carleton District of the Ontario Secondary School Teachers’ Federation, told demonstrators that his members had suffered the same type of treatment at the hands of the government of Ontario. It's better to fight these measures at the earliest opportunity, Maxwell advised, because once adopted, they are difficult to reverse.

On June 8, the national president of the Canadian Union of Postal Workers, Mike Palecek, talked about the many battles his members had waged with the government. For years now, postal workers have had to deal with the impact of a sick leave and short-term disability system, which was foisted on them by the government – a plan quite similar to what Treasury Board wants to impose across the public service.

Lastly, more than 300 activists heard the general secretary of Public Services International, Rosa Pavanelli, proclaim that Canada has a responsibility to respect the international conventions pertaining to the rights of workers, to which it is a signatory. Sanding before the Prime Minister's Office, she was flanked by Professional Association of Foreign Service Officers Communications Director Chrystiane Roy and members of several PSAC, PIPSC and CAPE bargaining teams.